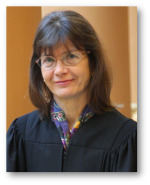 Elizabeth S. Stong has served as U.S. Bankruptcy Judge for the Eastern District of New York since 2003. Previously, she was a litigation partner and associate at Willkie Farr & Gallagher, a litigation associate at Cravath, Swaine & Moore, and a law clerk to Hon. David Mazzone, U.S. District Judge in the District of Massachusetts.

Back to Advisory Council Members