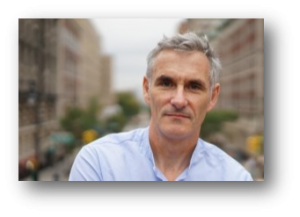 Brian Larkin is the Director of Graduate Studies and a Professor of anthropology at Barnard College, Columbia University. His research focuses on the ethnography and history of media in Nigeria. Most broadly he examines the introduction of media technologies into Nigeria—cinema, radio, digital media—and the religious, political, and cultural changes they bring about. He explores how media technologies comprise broader networked infrastructures that shape a whole range of actions from forms of political rule, to new urban spaces, to religious and cultural life. He has also published widely on issues of technology and breakdown, piracy and intellectual property, the global circulation of cultural forms, infrastructure and urban space, sound studies, and Nigerian film (Nollywood). He is currently completing the manuscript for Secular Machines: Media and the Materiality of Islamic Revival, which analyzes the role media play in the rise of new Islamic movements in Nigeria and explores theoretical questions about technology and religion.

With Stefan Andriopoulos, Larkin is Co-Director of the Comparative Media Initiative at Columbia University and co-founder of the University Seminar on Media Theory and History. He is a board member of the Institute for African Studies and the Temple Hoyne Buell Center for the Study of American Architecture, and a member of the Committee on Global Thought. Larkin is the author of Signal and Noise: Media Infrastructure and Urban Culture in Nigeria (Duke University Press, 2008) and, with Lila Abu-Lughod and Faye Ginsburg, co-editor of Media Worlds: Anthropology on New Terrain (University of California Press, 2000).