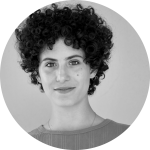 I hold two passports, one Algerian and one American. I have lived in Madagascar, South Africa, Eswatini and New York City. When I was 16 I attended the United World College of Southern Africa (UWCSA), an international school that selects students from over 60 different countries. The singularity of that context and my own multinational background sparked an intimate exploration of contested identities through performance and gender studies. I developed a passion for the stories of those liminal spaces, amorphous and fraught. This led me to NYU’s Tisch School of the Arts where I received a B.F.A. in Theatre. At Tisch, I began engaging with the links between theory and practice. I became a story-teller, while still deeply rooting my work in theoretical frameworks.

Since graduating from NYU I moved back to eSwatini, where I taught Theatre at UWCSA to students completing the International Baccalaureate. It was extremely rewarding to help students develop their own theoretical foundations and watch them put those into practice. Concurrently, I documented the work being done by a local association of sex workers and conducted research around gendered labour, police brutality and local laws. These two experiences allowed me to expand on a long-held interest in (infra)structures of power and the social processes that reproduce them. At the meeting point of architectural studies, performance studies and postcolonial studies, I am looking to research and produce a body of work around global architectures of power. My wide range of interests and multidisciplinary methodology are what led me to Columbia University’s Committee on Global Thought. Through this program, I aim to solidify my theoretical frameworks and widen my creative practice.