Crowds and Democracy: The Idea and Image of the Masses from Revolution to Fascism 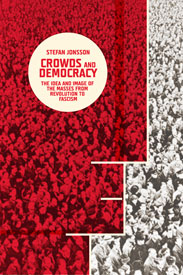 Stefan Jonsson and Andreas Huyssen will discuss Jonsson’s recent volume, Crowds and Democracy: The Idea and Image of the Masses from Revolution to Fascism, (Columbia University Press, 2013), published in the series Columbia Themes in Philosophy, Social Criticism, and the Arts.

Between 1918 and 1933, the masses became a decisive preoccupation of European culture, fueling modernist movements in art, literature, architecture, theater, and cinema, as well as the rise of communism and fascism and experiments in radical democracy.

Spanning aesthetics, cultural studies, intellectual history, and political theory, this volume unpacks the significance of the shadow agent known as “the mass” during a critical period in European history. It follows its evolution into the preferred conceptual tool for social scientists, the ideal slogan for politicians, and the chosen image for artists and writers trying to capture a society in flux and a people in upheaval. This volume is the second installment in Stefan Jonsson’s epic study of the crowd and the mass in modern Europe, building on his work in A Brief History of the Masses, which focused on monumental artworks produced in 1789, 1889, and 1989.

Stefan Jonsson is a writer and critic based in Sweden and professor of ethnic studies at Linköping University. His previous books include A Brief History of the Masses: Three Revolutions and Subject Without Nation: Robert Musil and the History of Modern Identity.