Arts have been periodically but consistently subjected to political pressures. Now, in many parts of the world, new voices are clamoring to constrain artistic expression and presentations of works of art. Even the traditional issues of cultural repatriation have taken on new urgency as the cause has been taken on by new actors. Social media platforms are creating new possibilities for artists to become politically engaged and the same platforms are utilized to instantaneously create social movements to destroy works of art seen as unpalatable to special groups. At the same time, politically conservative leaders in many parts of the world are using populist strategies and sophisticated social media platforms to put new pressures on artists and arts institutions.

The goal of this panel was to create a thoughtful conversation about the role of museums in dealing with these new pressures. We addressed not only the issues of identity and class politics, but also the repatriation questions that are raging high in Europe after the Macron report. What does this mean for U.S. museums? How do institutions plan to move forward in this new climate?

Held as part of the “Politics of Visual Arts in a Changing World” research project of the Committee on Global Thought, this panel discussion was moderated by Vishakha N. Desai, project leader and Committee Vice Chair. This event was made possible through the generous support of the Andy Warhol Foundation for the Visual Arts. 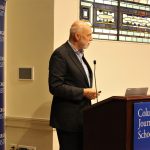 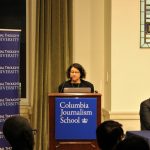 Click here to view more photos from the event! 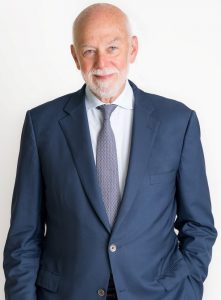 As Director of the Solomon R. Guggenheim Museum and Foundation since 2008, Richard Armstrong leads the Guggenheim Foundation and its constellation of museums, in addition to serving on the Guggenheim Foundation Board of Trustees. Previously, Armstrong was the Henry J. Heinz II Director at Carnegie Museum of Art, Pittsburgh (1996-2008). He has also held curatorial positions at Carnegie Museum of Art (1992-96), the Whitney Museum of American Art (1981-1992), and the La Jolla Museum of Contemporary Art in California (1975-79). A native of Kansas City, Missouri, Armstrong graduated from Lake Forest College in Illinois with a BA in art history, having studied at the Université de Dijon and the Université de Paris, Sorbonne. 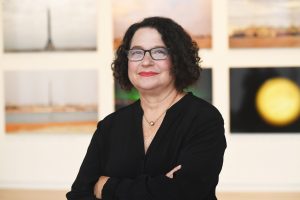 Betti-Sue Hertz is the newly appointed director and chief curator of the Wallach Art Gallery, Columbia University. Previously, she was director of visual arts at Yerba Buena Center for the Arts (2008-2015) where she curated numerous large-scale exhibitions often focused on global exchange and political agency including Public Intimacy: Art and Other Ordinary Acts in South Africa. She was the first curator of contemporary art at San Diego Museum of Art (2000-2008) where she developed a robust program of exhibitions and symposiums addressing transitions in cultural spheres of reference including Past in Reverse: Contemporary Art of East Asia. During the 1990s Hertz was active in the New York arts community as director of Longwood Arts Project (1992-1998) and a member of RepoHistory, an interdisciplinary group of cultural activists working in the public sphere. Hertz studied in the Ph.D. Program in Art History at the Graduate Center, CUNY, has been a lecturer at Stanford University and San Francisco Art Institute and was curator in residence at HOW Art Museum, Shanghai in 2018. 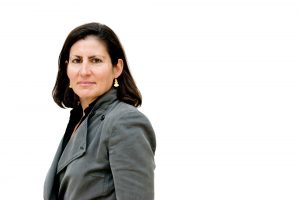 Alisa LaGamma is the Ceil and Michael E. Pulitzer Curator in Charge of the Department of the Arts of Africa, Oceania, and the Americas at the Metropolitan Museum of Art.  Her work there over the last twenty years expanding the collection and developing a dozen influential exhibitions has been instrumental in rethinking the history of sub-Saharan African art and culture.  In 2012 the Bard Graduate Center recognized this with the Iris Award for Outstanding Scholarship.  Among her most recent projects, Kongo:  Majesty and Power received critical acclaim and its publication has been recognized by the George Wittenborn Memorial Award, the International Tribal Art Book Prize, Honorable Mention for the PROSE Award, and finalist for the College Art Association’s Alfred H. Barr Jr. Award.  LaGamma’s Heroic Africans: Legendary Leaders, Iconic Sculptures received the 2012 International Tribal Art Book Prize and in 2007 the Association of Art Museum Curators recognized Eternal Ancestors:  Art of the Central African Reliquary as among the profession’s outstanding exhibition catalogues.

LaGamma is a 1988 graduate of the University of Virginia and received her MA and PhD in art history from Columbia University. Her 1995 dissertation: “The Art of the Punu Mukudj Masquerade: Portrait of an Equatorial Society” was based on a year of fieldwork in southern Gabon. Born in Lubumbashi, the Democratic Republic of the Congo, LaGamma spent formative years living in Côte d’Ivoire, Senegal, Nigeria, Togo, and South Africa.

Columbia University School of the Arts awards the Master of Fine Arts degree in Film, Theatre, Visual Arts, and Writing and the Master of Arts degree in Film and Media Studies; it also offers an interdisciplinary program in Sound Art. The School is a thriving, diverse community of talented, visionary, and committed artists from around the world and a faculty comprised of acclaimed and internationally renowned artists, film and theatre directors, writers of poetry, fiction, and nonfiction, playwrights, producers, critics, and scholars. In 2015, the School marked the 50th Anniversary of its founding. In 2017, the School opened the Lenfest Center for the Arts, a multi-arts venue designed as a hub for the presentation and creation of art across disciplines on the University’s new Manhattanville campus. The Lenfest hosts exhibitions, performances, screenings, symposia, readings, and lectures that present new, global voices and perspectives, as well as an exciting, publicly accessible home for Columbia’s Miriam and Ira D. Wallach Art Gallery.

ArtTable was founded in 1980 by a group of professional women in the visual arts to foster greater support, recognition, and opportunities among their peers. Today they are a national non-profit organization with a mutual support network of over 1,200 women who are leaders in the visual arts. Members expand their circle of colleagues, gain special access to art world events, and grow through professional development and mentorship opportunities. ArtTable's annual award for Distinguished Service to the Visual Arts recognizes innovative women leaders across the country. The organization also actively identifies and encourages emerging leaders in the field and recognizes their accomplishments with an annual New Leadership Award.