Some Philosophical Reflections on Our Political Ideals

The Committee on Global Thought (CGT) Lunchtime Seminars are a forum for Columbia University faculty and visiting scholars to present current research characterizing and assessing issues of global importance.

Akeel Bilgrami is a Sidney Morgenbesser Professor of Philosophy. He is a founding member of the Committee on Global Thought. He earned his philosophy degree from Bombay University before attending Oxford University as a Rhodes Scholar. There, he earned another Bachelor’s degree in Philosophy, Politics, and Economics (1974). He has a PhD from the University of Chicago (1983),  and joined the Philosophy Department in 1985 after spending two years as an Assistant Professor at the University of Michigan, Ann Arbor. 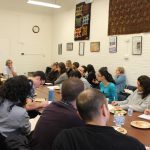 Attendees discuss the topic and enjoy their lunch 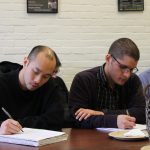 Students taking notes on the discussion 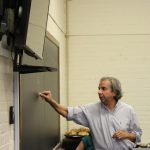 Below is the Lunchtime Seminar schedule for Fall 2017. The seminars take place on Thursdays from 12-1pm in Fayerweather Hall, Room 411 unless otherwise noted. Please check back for updates to the schedule.

Akeel Bilgrami, “Some Philosophical Reflections on Our Political Ideals”

Esteban Calvo, “From Cells to Society: Rethinking Public Policy in a Changing World”

Ursula Staudinger, “As You Sow, So Shall You Reap: Gender-Role Attitudes and Late-Life Cognition”

Yasmine Ergas, “Markets in Mothers and Markets in Children”

The seminars take place on Thursdays from 12-1pm in Fayerweather Hall, Room 411 unless otherwise noted.