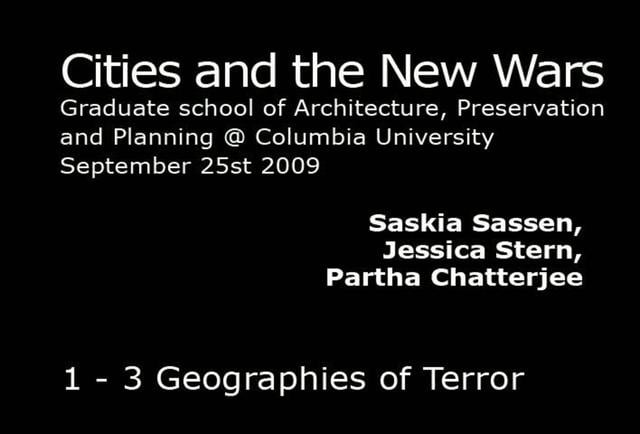 Speakers:
Partha Chatterjee - "The Black Hole of Empire"
Professor of Anthropology and Member, Committee of Global Thought at Columbia University and, Professor of Political Science at the Centre for Studies in Social Sciences in Calcutta, India.

Part of the Cities and the New Wars Conference held on September 25 - 26, 2009 at Columbia Univeristy.

Cities and the New Wars

How do cities confront conflict? This conference approached this question from two perspective. First, it explored the multiple meanings of the new urban wars: asymmetric armed conflict, US Army training for the “urban enemy,” forms of economic violence that kill, cities and urban space as a technology for war, and civil war refugees and their flight from and to cities. Secondly, it probed the limits of power and of war: the role of the civic, war and law, the consequences of the growing global web of interdependencies.

This conference was part of the Signature Research Project Urbanizing Technology: The Mobility Complex.

Urban Spaces as a Technology of War

The Dictionary of War Project

The concepts will be presented in 20-minutes time slots, in alphabetical order and without a break; they are recorded in a television studio setup, encoded in real-time and published on the internet.

(Dictionaryofwar.org is a collaborative platform for creating concepts on the topic of "war". This is their first US presentation. Previous events have been held in Frankfurt, Munich, Graz, Berlin, Novi Sad, Gwangju, Bolzano and Taipei. Fifteen speakers will each present a concept that plays a crucial role in the contemporary discourse on war and urban space. Such a concept might be a term that needs to be newly created, one that has been neglected so far, or one that needs to be re-invented.)