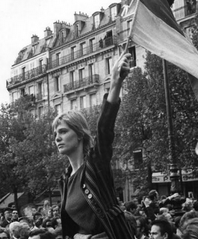 Revolts, revolutions and calls to resistance have shaped the 2010s globally. In this context, the 50th anniversary of Mai 68 calls less for a commemoration than for a reflection on the spatial and temporal parameters of the events of Mai 68 and their relevance today.

Traditional narratives locate the events of 1968 on a line running from Paris to New York, via Prague, Beijing and Tokyo.  We would like to also consider an alternative geography that includes Dakar, Madagascar, and Tunis. We intend to question the historical sequence in which Mai 68 makes sense. How can we interpret the different movements that challenged relations of power around race, gender, sexuality, labor, culture and knowledge as an ensemble? How did they shape subsequent political conflicts and how do they resonate with current political and social struggles?

The event will take place in Buell Hall's East Gallery.

Please note advance registration is required to attend this event.