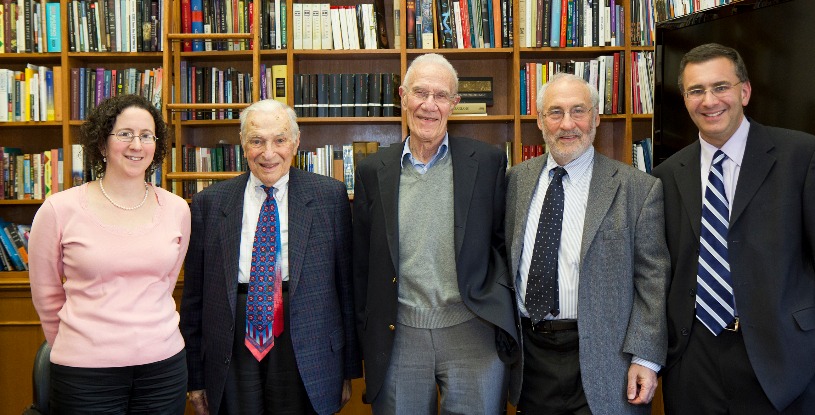 The Fifth Annual Arrow Lecture, “Moral Hazard in Health Insurance: Developments Since Arrow (1963)”, will be presented by Amy Finkelstein, Professor of Economics at MIT and co-Director of the Public Economics Program at the National Bureau of Economic Research.

Finkelstein’s research focuses on public finance and health economics, market failures and government intervention in insurance markets, and public policy’s impact on the health care sector. Just as the Supreme Court was ruling on the constitutionality of the Affordable Care Act, Finkelstein’s lecture will examine the issue of moral hazard in health insurance, an issue first identified by Arrow. Her lecture will explore whether demand for medical care is sensitive to price and how alternative health insurance policies affect the level and growth of health care spending.

Discussant Jonathan Gruber, Professor of Economics at MIT, has served as adviser to both democratic and republican politicians on health care reform.

Kenneth J. Arrow is Professor of Economics and of Operations Research, Emeritus at Stanford University. He earned his MA and PhD from Columbia University, where his dissertation explored his famous "impossibility theorem" and became the foundation for his seminal book, Social Choice and Individual Values. He was awarded the Nobel Memorial Prize in Economic Sciences with John Hicks in 1972 for their “pioneering contributions to general economic equilibrium theory and welfare theory.” Several of Arrow's students, including Joseph E. Stiglitz, have gone on to win the Nobel Prize. Arrow has also made major contributions to endogenous growth theory and information economics, and is considered one of the most influential practicing economists

Amy Finkelstein is the Ford Professor of Economics at the Massachusetts Institute of Technology. She is also the co-Director of the Public Economics Program at the National Bureau of Economic Research, where she is a Research Associate. Her research is in public finance and health economics, specifically market failures in insurance markets and the impact of public policy on these markets. Finkelstein received her AB summa cum laude in Government from Harvard University in 1995, and an M.Phil.in Economics from Oxford University in 1997, where she was a Marshall Scholar. She received her PhD in Economics from MIT in 2001. Prior to joining the MIT faculty in 2005, she was a Junior Fellow at the Harvard Society of Fellows.

Jonathan Gruber is a Professor of Economics at the Massachusetts Institute of Technology, where he has taught since 1992. He is also the Director of the Health Care Program at the National Bureau of Economic Research, where he is a Research Associate. Dr. Gruber received his B.S. in Economics from MIT, and his Ph.D. in Economics from Harvard University. Dr. Gruber's research focuses on the areas of public finance and health economics. He has published more than 140 research articles, has edited six research volumes, and is the author of Public Finance and Public Policy, a leading undergraduate text, and HealthCare Reform, a graphic novel. In 2006 he received the American Society of Health Economists Inaugural Medal for the best health economist in the nation aged 40 and under. During 2009-2010 he served as a technical consultant to the Obama Administration and worked with both the Administration and Congress to help craft the Patient Protection and Affordable Care Act. In 2011 he was named “One of the Top 25 Most Innovative and Practical Thinkers of Our Time” by Slate Magazine.