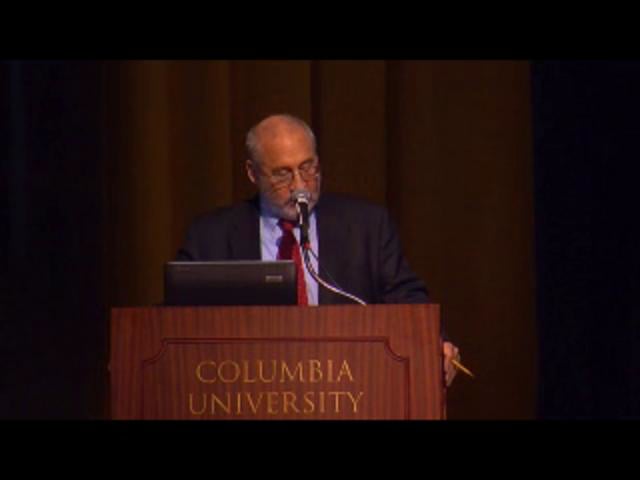 Sir Dasgupta's lecture will focus on the weakness in customary formulations of the idea of intergenerational well-being, and the resulting literature on the economics of climate change.

Sir Partha Dasgupta is the Frank Ramsey Professor of Economics and past chairman of the faculty of economics and politics at the University of Cambridge. From 1991 to 1997, Dasgupta was chairman of the scientific board of the Beijer International Institute of Ecological Economics of the Royal Swedish Academy of Sciences and, from 1989 to 1992, professor of economics and philosophy, and director of the Program in Ethics in Society at Stanford University. His research interests have covered welfare and development economics; the economics of technological change; population, environmental, and resource economics; the theory of games; and the economics of under nutrition.

The Committee on Global Thought presents

Time and Persons in the Economics of Climate Change

Sir Partha Dasgupta’s 2011 Arrow Lecture argues that the conventional moral formula used in discussing the economics of intergenerational justice in the context of global climate change is flawed, in that it does now have space for moral personhood. Dasgupta shows how Ramsey, Koopmans and Harsanyi use three distinct moral theories but arrived at the same moral formula for calculating intergenerational well-being. He then looks at recent interpretations of this formula by Cline, Stern and Nordhaus and the parameters of time preferences and consumption growth that led to their estimates of the discount rate. In Dasgupta’s view, the lack of agreement among these estimates stems from the different philosophical foundations that led to the selection of the parameters. Dasgupta then argues that time parameters change when we consider that people make a distinction between the self and others on personal matters, but on public matters, treat others impartially. This demands two discount rates, one private and one public. Dasgupta then concludes that the discount rate is a meaningless concept, and that the value unit of consumption across time, persons and generations are more significant. The valuation of marginal consumption changes on different people at different times and across contemporaries–and understanding the moral theories that are the basis of that valuation–is more important than discount rates.

Sir Partha Dasgupta is the Frank Ramsey Professor of Economics and past chairman of the faculty of economics and politics at the University of Cambridge. From 1991 to 1997, Dasgupta was chairman of the scientific board of the Beijer International Institute of Ecological Economics of the Royal Swedish Academy of Sciences and, from 1989 to 1992, professor of economics and philosophy, and director of the Program in Ethics in Society at Stanford University. His research interests have covered welfare and development economics; the economics of technological change; population, environmental, and resource economics; the theory of games; and the economics of under nutrition. Dasgupta is a fellow of St. John's College, a fellow of the Econometric Society, a fellow of the British Academy, foreign honorary member of the American Academy of Arts and Sciences, honorary fellow of the London School of Economics, honorary member of the American Economic Association, member of the Pontifical Academy of Social Sciences, foreign associate of the U.S. National Academy of Sciences, and fellow of the Third World Academy of Sciences. He is a past president of the Royal Economic Society (1998-2001) and the European Economic Association (1999). Dasgupta was named Knight Bachelor by Her Majesty Queen Elizabeth II in 2002 in her Birthday Honours List for services to economics and was co-recipient (with Karl Goran Maler) of the 2002 Volvo Environment Prize. He is a fellow of the Royal Society (elected 2004) and a foreign member of the American Philosophical Society (elected 2005).

Scott Barrett is the Lenfest-Earth Institute Professor of Natural Resource Economics at SIPA and the Earth Institute. He was previously a professor at the Johns Hopkins University School of Advanced International Studies in Washington, DC, where he also directed the International Policy program. Before that, he was on the faculty of the London Business School. He has also been a visiting scholar at Yale. Barrett's research focuses on transnational and global challenges, ranging from climate change to infectious diseases. He is the author of Environment and Statecraft: The Strategy of Environmental Treaty-Making and most recently Why Cooperate? The Incentive to Supply Global Public Goods. He has advised a number of international organizations, including the United Nations, the World Bank, the OECD, the European Commission, and the International Task Force on Global Public Goods. He was previously a lead author of the Intergovernmental Panel on Climate Change and a member of the Academic Panel to the Department of Environment in the UK. Barrett is a research fellow with the Beijer Institute (Stockholm), CESifo (Munich), and the Kiel Institute of World Economics.

Geoffrey Heal is Paul Garrett Professor of Public Policy and Corporate responsibility and Professor of Finance and Economics at the Graduate School of Business at Columbia University, Professor in the School of Public and International Affairs, Co-Director of Columbia's Center for Economy Environment and Society and of the Earth Institute's Center for Globalization and Sustainable Development. He taught at Cambridge as a Fellow of Christ's College, and subsequently at Sussex and Essex Universities in the UK, at the Universities of Paris and Stockholm, and in the U.S. at Yale, Stanford and Princeton. Heal is a Director of the Union of Concerned Scientists and was a founder and chairs the board of the Coalition for Rainforest Nations, a group of forested tropical countries that has worked to reform the Kyoto Protocol to provide financial incentives for forest conservation. Heal's current research interests reach from financial markets, where he studies the role of derivatives and the securitization of catastrophic risks, to environmental conservation, where he studies the use of market-based incentives for conservation of forests and biodiversity.