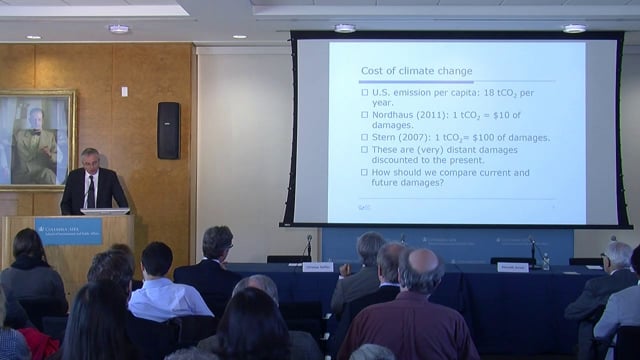 Christian Gollier explores the theory of risk-bearing, with an application to the welfare analysis of policies to reduce the risk of climate change.

Pricing the Planet’s Future: The Economics of Discounting in an Uncertain World

The Sixth Annual Arrow Lecture was inspired by Arrow’s important work on intergenerational equity and climate change, particularly “Intertemporal Equity, Discounting and Economic Efficiency” (with Cline, Maler, Munasinghe, Squitieri and Stiglitz) in Climate Change 1995 and “Discounting, Morality and Gaming,” in Discounting and Intergenerational Equity (Eds. Portney and Weyant, 1999). Arrow Lecturer Gollier discussed the theory of risk-bearing, with an application to the welfare analysis of policies to reduce the risk of climate change. He compared various approaches to carbon discounting, including the established carbon pricing models developed by Nordhaus and Stern, the discount rates set by various states, as well as positivist, normative and underlying utilitarian frameworks for discounting. He concludes with an argument for a short- and long-term discount rate, suggesting figures for both, and proposes a carbon cost of $20 per ton of CO2.

Christian Gollier is Director of the Toulouse School of Economics, Research Director at the Institut d’Economie Industrielle and researcher at the Laboratoire d’Economie des Ressources Naturelles, a research center associated with INRA and CNRS on environmental economics. He has published more than 100 articles in top-tier economic journals, as well as seven books on risk including The Economics of Risk and Time (MIT Press), winner of the 2001 Paul A. Samuelson Award and of the 2002 Prix Risques-les Echos, and Pricing the Planet’s Future (Princeton University, 2012). He was one of the Lead Authors of the fourth and fifth Reports of the Intergovernmental Panel of Climate Change (IPCC, 2007 and 2013), which was awarded the Nobel Peace Prize in 2007.

Bernard Salanié is Professor of Economics at Columbia University. Formerly Director of CREST (Paris), he has taught at Ecole Polytechnique, Stanford University, the University of Chicago, and the Toulouse School of Economics. Salanié is the author of Microeconomics of Market Failures (2000) and The Economics of Contracts: A Primer (second edition, 2005), both published by the MIT Press.