Listen to speaker voice notes at the tab above.

Part of the project on Unsettlement, an initiative of the CGT

A follow-up discussion to last November’s “Insecure Zones: Reflections from Africa and the Indian Ocean,”  hosted by the Committee on Global Thought at Columbia University and the Wits Institute for Social and Economic Research (WISER), and sponsored by the Department of Africana Studies at Barnard College. This roundtable discussion will be a space to generate conversation and to reflect on and our ongoing work in defining new concepts and terms to describe and understand the phenomenon of “Unsettlement.” Registrants will be asked to listen to voice notes from each of our eight speakers on themes that emerged from our November discussion and that will help us to “Think Unsettlement.” 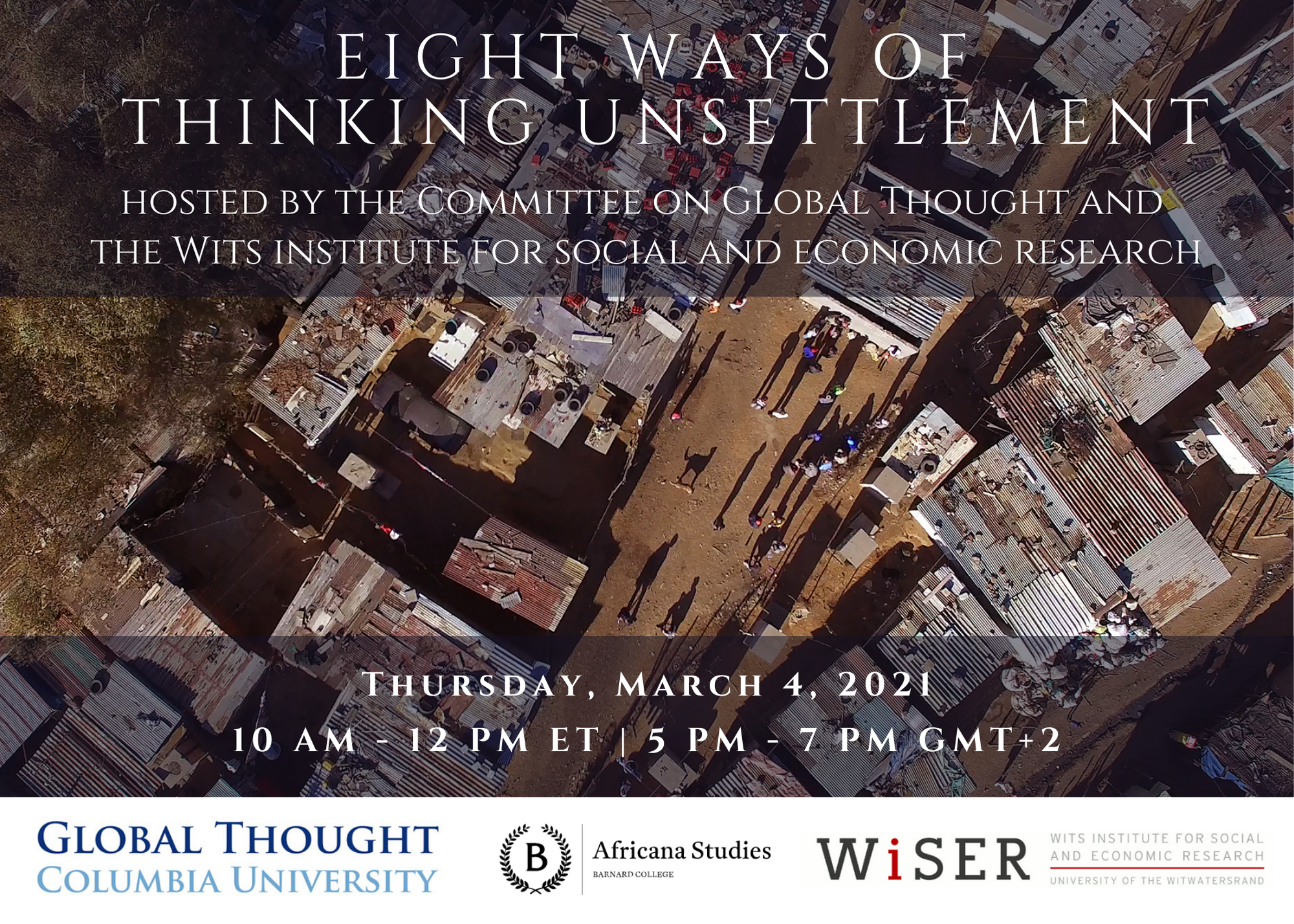 The project on Unsettlement was founded to address the predicament of those who, today, are stranded in states of indefinite displacement, deferred arrival and recurrent departure – people who live in places that lack infrastructures of permanence, but who must reside there for years, decades and even generations. They are often on the move, but lack the freedom and rights of mobility. Unsettlement in this sense is not merely a question of migrancy, and the project is impelled by the need to generate concepts and forms of practice that move beyond that discourse and the associated assumptions of transition. It aims to address the duration, intensity and uncertainty of long-term displacement, while moving beyond oppositions between voluntary and involuntary movement, on one hand, and economic or material exigency versus economic desire on the other.

Yvette Christiansë is Clair Tow Professor of Africana Studies and English Literature at Barnard College, and Chair of the Department of Africana Studies. She is the author the award-winning novel, Unconfessed and poetry volumes, Castaway and Imprendehora, as well as a volume of literary criticism entitled, Toni Morrison: An Ethical Poetics (Fordham University Press 2013). Professor Christiansë’s ongoing research concerns the fates of Liberated Africans—those who were freed from the holds of slave vessels between 1807 and the early years of the twentieth century—and the stalled pursuit of the abolition of African Slavery. Her research has taken her to archives in the Indian and Atlantic Oceans, in the USA and within Africa, in an effort to understand the relentless movements and deferred arrivals of these Africans. Recent essays on this issue include ‘‘At Sea in the Archive.’ In Being a Slave: Histories and Legacies of European Slavery in the Indian Ocean, Alicia Shrikker and Nira Wickramasinghe, eds. Leiden: Leiden University Press, 2020: 149-181 and ‘Extracting Liberation.’ Berlin Journal. No. 33 (Fall 2019): 77-79.

Dr. Euclides Gonçalves is a social anthropologist and director at ‘Kaleidoscopio – Research in Public Policy and Culture.’  His research focuses on governance, bureaucratic processes and political rituals. His latest work looked at how in the context of the justice sector reform, citizens and government officials in Mozambique produce and appropriate documents to settle everyday disputes and promote their own interests. His new project looks at the life of identity and bureaucratic documents and how citizens and bureaucrats use these to creatively navigate between formal and informal bureaucratic processes. Recent publications include an article in African Affairs “Orientações superiores: Time and bureaucratic authority in Mozambique.”

Isabel Hofmeyr is Professor of African Literature at Wits and Global Distinguished Professor at New York University. Over the last two decades, she has pioneered research on global, oceanic and transnational forms of literary and cultural history that seek to understand Africa’s place in the world.  She is a leading scholar of the Indian Ocean world. Hofmeyr has served as Acting Director of the Centre for Indian Studies in Africa (www.cisa-wits.org.za) which she played a leading role in establishing. See more at: https://www.wits.ac.za/staff/academic-a-z-listing/h/isabelhofmeyrwitsacza/#sthash.afD5J7zT.dpuf At WISER, she works on a project on Oceanic Humanities. Her prize-winning books include The Portable Bunyan: A Transnational History of The Pilgrim’s Progress (1994); Gandhi’s Printing Press: Experiments in Slow Reading (2013) and Ten Books that Shaped the British Empire: Creating an Imperial Commons (2015) (co-edited with Antoinette Burton)

Johannes Machinya is a Mellon Postdoctoral Fellow co-hosted by the African Studies Center (ASC) at the University of Michigan and the Wits Institute for Social and Economic Research (WISER) at the University of the Witwatersrand. He was also a Mellon Doctoral Fellow at the Wits History Workshop’s Local Histories and Present Realities’ research programme. His research interests are on migration and politics; migration control, time and temporality; migration and labour.

Mpho Matsipa joined WiSER as a Research Fellow in April 2019. Mpho divides her time between the Wits School of Architecture and Planning, where she holds a position as lecturer in design and urban research, and WiSER. She completed her PhD in Environmental Design in Developing Countries at the University of California, Berkeley, on the topic of ‘The Order of Appearances – Urban Renewal in Johannesburg’. Since 2016 she has been a researcher in design and urbanism at the Wits City Institute.  Mpho is currently the curator of the African Mobilities Project. The project aims to rethink the geography of African migrations and the challenges and opportunities they pose for doing architecture and urbanism differently, at the intersection of migration, displacement and digital technology. African Mobilities is conceptualized as a space, a conference, a digital publication and a mobile pedagogical platform that connects fourteen diverse locations through workshops and masterclasses; Johannesburg, Harare, Kampala, Addis Ababa, Munich, Luanda, Abijan, Lagos, New York, Dakar, Nairobi, London, Lubumbashi and Praia.

Professor Achille Mbembe, born in Cameroon, obtained his Ph.D in History at the Sorbonne in Paris and a D.E.A. in Political Science at the Institut d’Etudes Politiques (Paris). He has taught throughout the United States, and is presently Research Professor of History and Politics at the Wits Institute for Social and Economic Research. Professor has received numerous awards and honors, including the 2015 Geswichter Scholl-Preis, the 2018 Gerda Henkel Award and the 2018 Ernst Bloch Award. A co-founder of Les Ateliers de la pensée de Dakar and a  major figure in the emergence of a new wave of French critical theory, Mbembe has written extensively on contemporary  politics and philosophy, including On the Postcolony (University of California Press, 2001), Critique of Black Reason (Duke University Press, 2016), Necropolitics (Duke University Press, 2019) and Out of the Dark Night. Essays on Decolonization (Columbia University Press, 2020).

Rosalind Morris is Professor of Anthropology at Columbia University, where she also directs the project on ‘Unsettlement’ for the Committee on Global Thought.  She is the author of numerous books and essays, and lectures internationally. Her most recent book is The Returns of Fetishism: Charles de Brosses and the Afterlives of an Idea (with Daniel Leonard, 2017) and she is currently completing a monograph based on long-term ethnographic research, entitled Unstable Ground: The Lives, Deaths and Afterlives of Gold in South Africa. In addition to her scholarly writings, Morris has collaborated extensively with South African artists.  She has directed and produced works in documentary, narrative and expanded cinematic forms; her film, We are Zama Zama, about undocumented informal miners in South Africa, will be released in 2021. With Yvette Christiansë, she is also the co-librettist on two operas with the composer Zaid Jabri.

Sarah Nuttall is Professor of Literary and Cultural Studies and Director of WiSER (Wits Institute for Social and Economic Research) in Johannesburg, South Africa. She is the author of Entanglement: Literary and Cultural Reflections on Postapartheid, editor of Beautiful/Ugly: African and Diaspora Aesthetics, and co-editor of many books including Negotiating the Past: The Making of Memory in South Africa; Senses of Culture; Johannesburg: The Elusive Metropolis and Loadshedding: Writing On and Over the Edge of South Africa. Recent essays include ‘Mandela’s Mortality’; ‘Secrecy’s Softwares’; ‘Surface, Depth and the Autobiographical Act’; ‘The Redistributed University’; and ‘The Earth as a Prison?’ She has given more than thirty keynote addresses around the world, and published more than sixty journal articles and book chapters. Her work is widely cited across many disciplines. She has taught at Yale and Duke Universities and in 2016 she was an Oppenheimer Fellow at the DuBois Institute at Harvard University. For seven years she has directed WISER, the largest and most established Humanities Institute across the Global South.