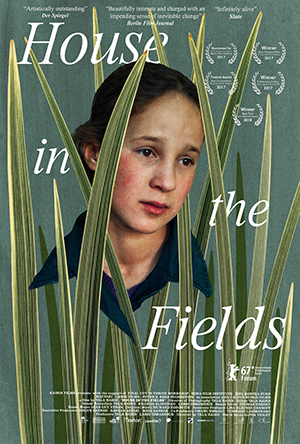 Tala Hadid will discuss her film House in the Fields, a quiet and poetic documentary depicting rural life in Morocco’s Atlas Mountains. The film portrays the close relationship of two sisters coming of age in their traditional Amazigh village and the upheaval of evolving sociopolitical realities.

Hadid traces the traditions and daily activities of two sisters as they farm, cook, and gather in an isolated Amazigh community. As the film moves through the seasons, the young women reveal parallel aspirations and trepidations about their futures. Sixteen-year-old Khadija dreams of becoming a lawyer; her older sister Fatima is engaged to be married. As modernity encroaches, Hadid’s immersive film subtly prompts questions about effects on their indigenous pastoral culture which remained largely unchanged for centuries.

“I’m a London-born, US-educated woman of Moroccan and Iraqi descent,” says Tala Hadid. “Sometimes I feel that I have a foot in both/all worlds. This hybrid existence, though sometimes complicated, is also a space of freedom that allows a particular way of seeing—to belong to all, and yet to none.”

A filmmaker and photographer who trained as a painter, Hadid is the director of several award-winning short films including Your Dark Hair Ihsan (Tes Cheveux Noirs Ihsan) (2004) made as her thesis film in the MFA program at Columbia. Before coming to Columbia, she directed Sacred Poet, a film that focuses on the Italian poet and filmmaker Pier Paolo Pasolini, including a rare interview with Bernardo Bertolucci.  She directed a feature-length film Narrow Frame of Midnight which premiered at the Toronto Film Festival (2014). In 2010/2011 she worked on an independent project entitled Heterotopia, a series of photographs documenting life a New York City brothel. Her most recent work, House in the Fields, a documentary film project depicting rural life in Morocco’s Atlas Mountains, was screened at the 72nd Venice International Film Festival; it won a Final Cut Award at the Venice Film Market and showed as well at The International Forum at the Berlin Film Festival.

For Columbia students and affiliates, the film is available at the following link (with CU ID): https://www1.columbia.edu/sec/dlc/ereserves/data/FILM/5220R/COLL2VF2015.html. (Please view the film before the Master Class–it will not be shown during the meeting.)

The film is also available at: https://vimeo.com/ondemand/houseinthefields.