A discussion of Radicalizing Her 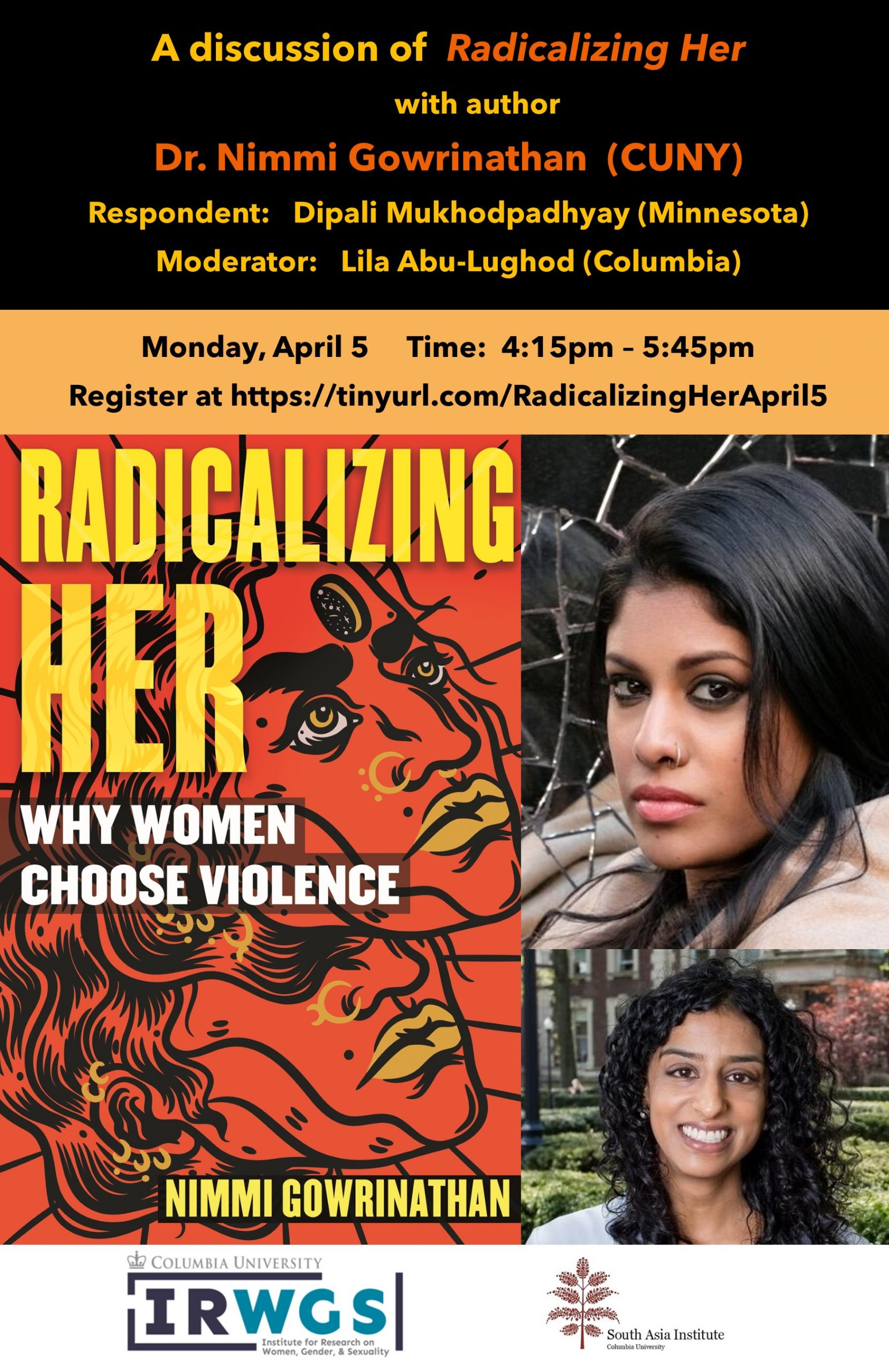 Co-sponsored by the Institute for Research on Women, Gender, and Sexuality and the South Asia Institute

Though the female fighter is often seen as an anomaly, women make up nearly 30% of militant movements worldwide. Historically, these women–viewed as victims, weak-willed wives, and prey to Stockholm Syndrome–have been deeply misunderstood. Radicalizing Her holds the female fighter up in all her complexity as a kind of mirror to contemporary conversations on gender, violence, and power. Dr. Gowrinathan spent nearly twenty years in conversation with female fighters in Sri Lanka, Eritrea, Pakistan, and Colombia. The intensity of these interactions consistently unsettled her assumptions about violence, re-positioning how these women were positioned in relation to power. Gowrinathan posits that the erasure of the female fighter from narratives on gender and power is not only dangerous but also, anti-feminist.  She argues for a deeper, more nuanced understanding of women who choose violence.

Dr. Nimmi Gowrinathan is a writer, a scholar, and an activist.  She is a Visiting Research Professor at the City College of New York.  Gowrinathan’s research interests include gender and violence, female extremism, social movements, issues of asylum, ethnic conflict, and the impact of militarization, displacement, and race in Sri Lanka. Her work on the female fighter has been featured in publications as varied as Vice, Harper's, Foreign Policy, Freeman's Journal, and The New York Times. She is the publisher of Adi Magazine, a literary magazine aiming to rehumanize policy, the author of the blog “Deviarchy,” and created the “Female Fighters Series” at Guernica Magazine. Her forthcoming book, Radicalizing Her, examines the complex politics of the female fighter (Penguin 2021).

As a Visiting Professor at the City College of New York, she founded the “Politics of Sexual Violence Initiative,” exploring the impact of sexual violence on women's political identities, and “Beyond Identity: A Gendered Platform for Scholar-Activists,” a program that seeks to train immigrants and students of color in identity-driven research, political writing, and activism anchored in an analysis of structural violence.

Dipali Mukhopadhyay is Associate Professor in the global policy area at the Humphrey School of Public Affairs at the University of Minnesota. Her research focuses on the relationships between political violence, state building, and governance during and after war. She is currently serving as senior expert on the Afghanistan peace process for the U.S. Institute of Peace.  She is the author, with Kimberly Howe, of Good Rebel Governance: Revolutionary Politics and Western Intervention in Syria (forthcoming), and the monograph Warlords, Strongman Governors and State Building in Afghanistan (2014).

Lila Abu-Lughod is Joseph L. Buttenwieser Professor of Social Science, Institute for Research on Women, Gender and Sexuality and Department of Anthropology.  Abu-Lughod’s work has focused on three broad issues: the relationship between cultural forms and power; the politics of knowledge and representation; and the dynamics of women’s and human rights, global liberalism, and feminist governance of the Muslim world. Current research has focused on feminism, geopolitics and gender violence building out from her most recent book,  Do Muslim Women Need Saving? (2013).