A discourse on Islamist militancy in Africa 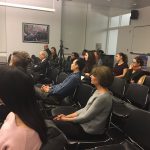 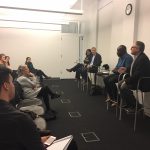 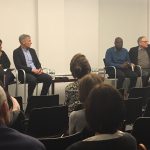 Panelists take questions from the audience.

Click here to view more photos from this Book Talk.

Register for #bringbackourgirls by clicking the button below.

Helon Habila was born in Nigeria. He studied English Language and Literature at the University of Jos. In 1999 he moved to Lagos, where he worked for the magazine Hints; he later moved on to Vanguard Newspaper as Literary Editor. Apart from his novels, Habila has edited several anthologies including the British Council’s, New Writing (2005), Dreams Miracles and Jazz (2006), and The Granta Book of the African Short Story (2011). Habila is also on the board of Africa Writers Trust, an organization started by the Ugandan writer, Goretti Kyumuhendo, to promote African writers and writing. Habila has been a contributing editor to the “Virginia Quarterly Review” since 2004.  From 2010-2013 Habila coordinated and facilitated the Fidelity Bank Writers Workshop in Nigeria, and has edited an anthology of stories generated by the workshop participants, titled, Dreams at Dawn (2012). From July 2013- June 2014 Habila was a DAAD Fellow in Berlin, Germany, where he started work on his next novel tentatively titled, The Fortress. 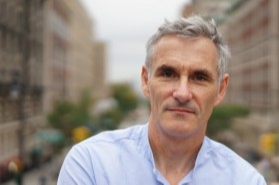 is the Director of Graduate Studies and a Professor of anthropology at Barnard College, Columbia University. His research focuses on the ethnography and history of media in Nigeria. Most broadly he examines the introduction of media technologies into Nigeria—cinema, radio, digital media—and the religious, political, and cultural changes they bring about. He explores how media technologies comprise broader networked infrastructures that shape a whole range of actions from forms of political rule, to new urban spaces, to religious and cultural life. He has also published widely on issues of technology and breakdown, piracy and intellectual property, the global circulation of cultural forms, infrastructure and urban space, sound studies, and Nigerian film (Nollywood). He is currently completing the manuscript for Secular Machines: Media and the Materiality of Islamic Revival, which analyzes the role media play in the rise of new Islamic movements in Nigeria and explores theoretical questions about technology and religion.

Shobana Shankar is an Assistant Professor of History at Stony Brook University. She examin

es British colonialism, cross-cultural encounters, and the making of social difference and inequality in West Africa, particularly Nigeria, a nation that has experienced considerable religious violence in recent years. Her research brings an historical lens to Christian-Muslim relations, showing that religious difference has evolved out of complicated negotiations of gender, class, racial, and ethnic dynamics in the context of British and American Christian missionary work in Muslim areas. Her other work has focused on the social and cultural politics of medicine, the link between missions and UNICEF’s early efforts in sub-Saharan Africa, and, as a side interest, gender and racial hierarchies in blues music recording in Jim Crow Mississippi. She speaks Hausa, Kiswahili, Tamil, and French, and hopes to bring these skills to her next project on a history of South Asian-African exchanges of religious culture and “traditional medicines.” In addition to her academic experience, she has worked for UNICEF and Schomburg Center for Research in Black Culture.

and currently a professor at the school. In addition, he is a staff writer for The New Yorker and author of several highly acclaimed books, including Redemption: The Last Battle of the Civil War; The Big Test: The Secret History of the American Meritocracy; and The Promised Land: The Great Black Migration and How It Changed America.