This program has been postponed at the request of the speakers in support of the ongoing Graduate Workers of Columbia strike. 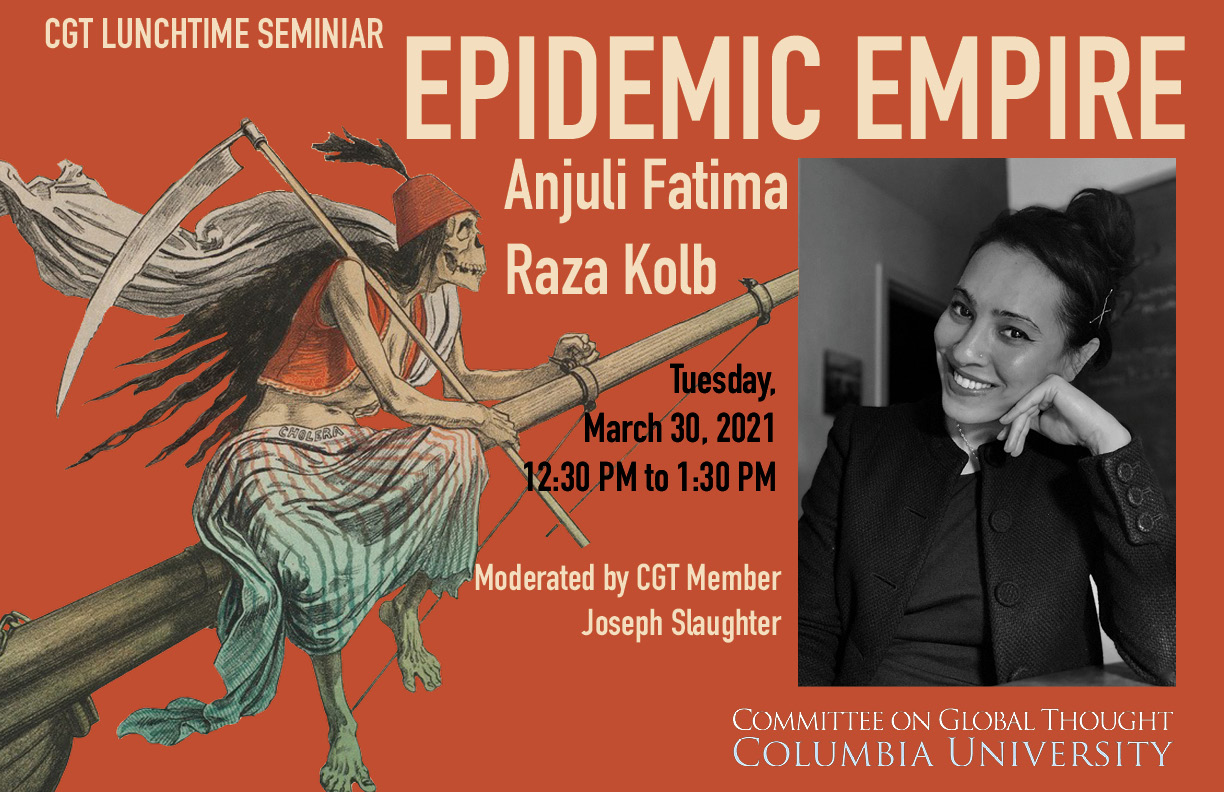 Anjuli Raza Kolb is a scholar of colonial and postcolonial literature and theory with particular research interests in the history of science and intellectual history, poetry and poetics, gender and sexuality studies, political theory and independence movements, the gothic and horror, and comparative literary studies. Her work has been supported by the Hellman foundation, the Edward W. Said fellowship at Columbia University’s Heyman Center for the Humanities, and City College New York’s Beyond Identity program where she served as visiting expert scholar in women’s and gender studies in 2017.

Her first scholarly monograph, Epidemic Empire: Colonialism, Contagion, and Terror, 1817-2020 (forthcoming, University of Chicago Press) lays out the literary and discursive history behind the ubiquitous figure of the “terrorism epidemic,” locating the origin of contemporary global Islamophobia in the post-Mutiny British empire, and assessing the contemporary “epidemiological” approach to terrorism as a legacy of therapeutic empire. With readings of the Muslim ban, Rudyard Kipling, the 19th century Anglo-Indian cholera archive, Bram Stoker, Albert Camus, Frantz Fanon, Djamila Boupacha, The Battle of Algiers, Salman Rushdie, and the 9/11 Commission Report, Epidemic Empire calls for comparative and postcolonial methods for the study of the political present.Anjuli is also at work on a second scholarly book about special commodities (sugar, water, and world literature), a collection of poems after the Urdu poet Iqbal entitled Janaab-e Shikva (Watchqueen), and a set of articles on the natural sciences in the colonies. Her poems, translations, essays, and other writings have appeared and are forthcoming in various venues including the Los Angeles Review of Books, Discourse, FENCE, Critical Quarterly, The Boston Review, Peach Magazine, Reality Beach, Public Books, Victorian Studies, Triple Canopy, Guernica, and more.