The Committee on Global Thought is comprised of some of the world’s most renowned global scholars who have published on topics ranging from political economics and memory to cosmology and international finance. As a result, the CGT library has grown to include everything from multi-year series collections and contributor volumes to textbooks and biographies. Many projects have evolved out of conference and lecture programming, with the goal of turning fruitful discussions into lasting contributions to the field. Click here to view the entire CGT archive. 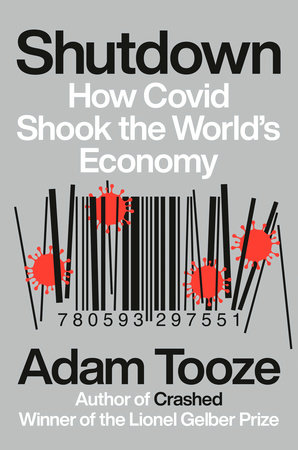 The shocks of 2020 have been great and small, disrupting the world economy, international relations and the daily lives of virtually everyone on the planet. Never before has the entire world economy contracted by 20 percent in a matter of weeks nor in the historic record of modern capitalism has there been a moment in which 95 percent of the world’s economies were suffering all at the same time. Across the world hundreds of millions have lost their jobs. And over it all looms the specter of pandemic, and death.

Adam Tooze, whose last book was universally lauded for guiding us coherently through the chaos of the 2008 crash, now brings his bravura analytical and narrative skills to a panoramic and synthetic overview of our current crisis. By focusing on finance and business, he sets the pandemic story in a frame that casts a sobering new light on how unprepared the world was to fight the crisis, and how deep the ruptures in our way of living and doing business are. The virus has attacked the economy with as much ferocity as it has our health, and there is no vaccine arriving to address that.

Tooze’s special gift is to show how social organization, political interests, and economic policy interact with devastating human consequences, from your local hospital to the World Bank. He moves fluidly from the impact of currency fluctuations to the decimation of institutions–such as health-care systems, schools, and social services–in the name of efficiency. He starkly analyzes what happened when the pandemic collided with domestic politics (China’s party conferences; the American elections), what the unintended consequences of the vaccine race might be, and the role climate change played in the pandemic. Finally, he proves how no unilateral declaration of ‘independence” or isolation can extricate any modern country from the global web of travel, goods, services, and finance. Click here for more details.

Knowledge Worlds: Media, Materiality, and the Making of the Modern University 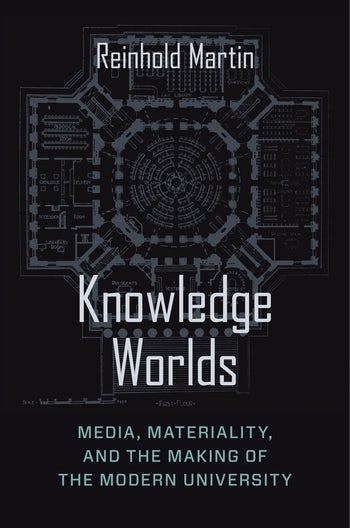 What do the technical practices, procedures, and systems that have shaped institutions of higher learning in the United States, from the Ivy League and women’s colleges to historically black colleges and land-grant universities, teach us about the production and distribution of knowledge? Addressing media theory, architectural history, and the history of academia, Knowledge Worlds reconceives the university as a media complex comprising a network of infrastructures and operations through which knowledge is made, conveyed, and withheld.

Reinhold Martin argues that the material infrastructures of the modern university—the architecture of academic buildings, the configuration of seminar tables, the organization of campus plans—reveal the ways in which knowledge is created and reproduced in different kinds of institutions. He reconstructs changes in aesthetic strategies, pedagogical techniques, and political economy to show how the boundaries that govern higher education have shifted over the past two centuries. From colleges chartered as rights-bearing corporations to research universities conceived as knowledge factories, educating some has always depended upon excluding others. Knowledge Worlds shows how the division of intellectual labor was redrawn as new students entered, expertise circulated, science repurposed old myths, and humanists cultivated new forms of social and intellectual capital. Combining histories of architecture, technology, knowledge, and institutions into a critical media history, Martin traces the uneven movement in the academy from liberal to neoliberal reason. Click here for more details.

Did South Asia have a shared regional identity prior to the arrival of Europeans in the late fifteenth century? This is a subject of heated debate in scholarly circles and contemporary political discourse. Manan Ahmed Asif argues that Pakistan, Bangladesh, and the Republic of India share a common political ancestry: they are all part of a region whose people understand themselves as Hindustani. Asif describes the idea of Hindustan, as reflected in the work of native historians from roughly 1000 CE to 1900 CE, and how that idea went missing.

This makes for a radical interpretation of how India came to its contemporary political identity. Asif argues that a European understanding of India as Hindu has replaced an earlier, native understanding of India as Hindustan, a home for all faiths. Turning to the subcontinent’s medieval past, Asif uncovers a rich network of historians of Hindustan who imagined, studied, and shaped their kings, cities, and societies. Asif closely examines the most complete idea of Hindustan, elaborated by the early seventeenth century Deccan historian Firishta. His monumental work, Tarikh-i Firishta, became a major source for European philosophers and historians, such as Voltaire, Kant, Hegel, and Gibbon during the eighteenth and nineteenth centuries. Yet Firishta’s notions of Hindustan were lost and replaced by a different idea of India that we inhabit today.

The Loss of Hindustan reveals the intellectual pathways that dispensed with multicultural Hindustan and created a religiously partitioned world of today. Click here for more details.

Trapped in the Middle?: Developmental Challenges for Middle-Income Countries 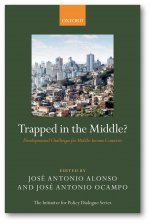 There is growing evidence that overcoming the low-income threshold and reaching middle-income status is not sufficient for countries to converge toward high-income levels. Few middle-income countries have successfully completed that transit in recent decades, with the majority remaining in the middle-income group, and so facing what has come to be called “the middle-income trap”. It is therefore essential to explore whether middle-income traps really exist and, if they do, how these pitfalls are manifested, what their causes are, what economic policy measures are required to escape from them, and what international cooperation can do to support this process. Trapped in the Middle? brings together diverse perspectives on these important questions, providing new evidence and analytical approaches to enrich the debate on the domestic and international challenges faced by a significant number of middle-income countries, in which over three-quarters of the global population live. Click here for more details. 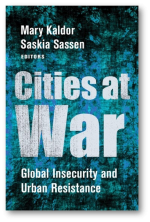 In Cities at War, Mary Kaldor and Saskia Sassen assemble an international team of scholars to examine cities as sites of contemporary warfare and insecurity. Reflecting Kaldor’s expertise on security cultures and Sassen’s perspective on cities and their geographies, they develop new insight into how cities and their residents encounter instability and conflict, as well as the ways in which urban forms provide possibilities for countering violence. Through a series of case studies of cities including Baghdad, Bogotá, Ciudad Juarez, Kabul, and Karachi, the book reveals the unequal distribution of insecurity as well as how urban capabilities might offer resistance and hope. Through analyses of how contemporary forms of identity, inequality, and segregation interact with the built environment, Cities at War explains why and how political violence has become increasingly urbanized. It also points toward the capacity of the city to shape a different kind of urban subjectivity that can serve as a foundation for a more peaceful and equitable future. Click here for more details. 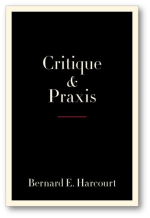 Critical philosophy has always challenged the division between theory and practice. At its best, it aims to turn contemplation into emancipation, seeking to transform society in pursuit of equality, autonomy, and human flourishing. Yet today’s critical theory often seems to engage only in critique. These times of crisis demand more. Bernard E. Harcourt challenges us to move beyond decades of philosophical detours and to harness critical thought to the need for action. In a time of increasing awareness of economic and social inequality, Harcourt calls on us to make society more equal and just. Only critical theory can guide us toward a more self-reflexive pursuit of justice. Charting a vision for political action and social transformation, Harcourt argues that instead of posing the question, “What is to be done?” we must now turn it back onto ourselves and ask, and answer, “What more am I to do?” Click here for more details.