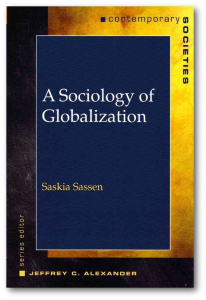 In her groundbreaking book, sociologist Saskia Sassen identifies two sets of processes that make up globalization. One is the set of global institutions, such as the World Trade Organization, global financial markets, the War Crimes Tribunals and the new global cosmopolitanism. However, there is a second set of processes, frequently ignored by most social scientists, that occur on the national and local level. These processes can include state monetary and fiscal policy, networks of activists engaged in local struggles that have an explicit or implicit global agenda, and local and national politics that are unknowingly part of global networks containing similar localized efforts. Sassen’s new book focuses on the importance of place, scale and the meaning of the national to study globalization. By emphasizing the interplay between the global and the local, A Sociology of Globalization introduces readers to new forms and conditions such as global cities, transnational communities and commodity chains that are increasingly common. Sassen’s expanded approach to globalization offers new interpretive and analytic tools to understand the complex ideas of global interdependence.