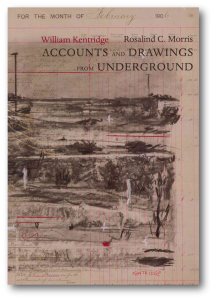 William Kentridge has been drawing on books for decades. Rosalind Morris has been doing research on the gold mines of South Africa for many years. In this unique collaboration, they have both ‘worked on’ the 1906 Cash Book of the East Rand Proprietary Mines Corporation, once one of the largest gold mining companies in South Africa.

In the early years of the twentieth century, as Johannesburg was being built and the gold mines of the Rand were becoming sources of unprecedented wealth, newly formed mining companies kept their accounts in enormous leather-bound registers. There, on their heavy pages, were kept the accounts of every expenditure and the calculation of every profit. These ‘Cash Books’ are the repositories of a history that has been both buried and made the foundation of South Africa.

Kentridge has drawn on these pages, using the paper surface as a support and a point of departure for charcoal images that are obliquely rooted in the material referents of the text but that also take flight into other domains and other times. The 40 drawings that make up the book are landscapes, responses to the transient terrain that mining created and visual epitaphs to a history of disappearances.

Treating the Cash Book not as a surface but as an opening, Rosalind C. Morris has plumbed the text of the Cash Book to generate a narrative account of the moment from which it emerges: 1906. Reading down and across the columns of the page as though they were themselves shafts in the earth, she draws together the stories of migrant labourers and charts the flows of capital and desire as they tunneled through the globe, overwriting the text of the Cash Book to give us a palpable sense of the world that gold mining made. The product of a long and thoughtful collaboration, the book includes Kentridge’s drawings, as well as images of the original Cash Book pages.

Available at the University of Chicago Press.