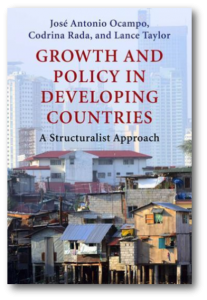 Economic structuralists use a broad, system-wide approach to understanding development, and this textbook assumes a structuralist perspective in its investigation of why a host of developing countries have failed to grow at 2 percent or more since 1960. Sensitive to the wide range of factors that affect an economy’s strength and stability, the authors identify the problems that have long frustrated growth in many parts of the developing world while suggesting new strategies and policies to help improve standards of living.

After a survey of structuralist methods and post-World War II trends of global economic growth, the authors discuss the role that patterns in productivity, production structures, and capital accumulation play in the growth dynamics of developing countries. Next, it outlines the evolution of trade patterns and the effect of the terms of trade on economic performance, especially for countries that depend on commodity exports.

The authors acknowledge the structural limits of macroeconomic policy, highlighting the negative effects of financial volatility and certain financial structures while recommending policies to better manage external shocks. These policies are then further developed through a discussion of growth and structural improvements, and are evaluated according to which policy options-macro, industrial, or commercial—best fit within different kinds of developing economies.