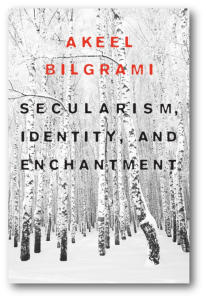 Bringing clarity to a subject clouded by polemic, Secularism, Identity, and Enchantment is a rigorous exploration of how secularism and identity emerged as concepts in different parts of the modern world. At a time when secularist and religious worldviews appear irreconcilable, Akeel Bilgrami strikes out on a path distinctly his own, criticizing secularist proponents and detractors, liberal universalists and multicultural relativists alike.

Those who ground secularism in arguments that aspire to universal reach, Bilgrami argues, fundamentally misunderstand the nature of politics. To those, by contrast, who regard secularism as a mere outgrowth of colonial domination, he offers the possibility of a more conceptually vernacular ground for political secularism. Focusing on the response to Salman Rushdie’s Satanic Verses, Bilgrami asks why Islamic identity has so often been a mobilizing force against liberalism, and he answers the question with diagnostic sympathy, providing a philosophical framework within which the Islamic tradition might overcome the resentments prompted by its colonized past and present.

Turning to Gandhi’s political and religious thought, Bilgrami ponders whether the increasing appeal of religion in many parts of the world reflects a growing disillusionment not with science but with an outlook of detachment around the rise of modern science and capitalism. He elaborates a notion of enchantment along metaphysical, ethical, and political lines with a view to finding in secular modernity a locus of meaning and value, while addressing squarely the anxiety that all such notions hark back nostalgically to a time that has past.