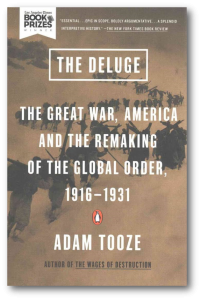 In the depths of the Great War, with millions dead and no end to the conflict in sight, societies around the world began to buckle. The strain of total war ravaged all economic and political assumptions, shattering old empires and redrawing maps across Europe and the Middle East.

A century after the outbreak of fighting, Yale historian Adam Tooze takes an entirely new perspective on “the war to end all wars,” focusing on the closing years of the conflict and its aftermath up to the Great Depression. This tumultuous period saw hopes for lasting peace and liberal internationalism collide with violent upheavals and the ultimate rise of totalitarian regimes. And it saw the emergence of a new global order in which all the major powers—the war’s winners and losers alike—saw their fates bound up with those of the United States, now the world’s dominant economic force. All-embracing, powerfully argued, and deeply instructive, The Deluge is essential reading for anyone who wants to understand the roots of America’s fraught relationship with the world.