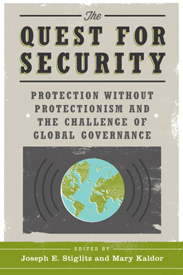 The essays in this collection boldly confront the quest for security arising from the social, economic, environmental, and political crises and transformations of our century. Joseph E. Stiglitz and Mary Kaldor begin with an expansive, balanced analysis of the global landscape and the factors contributing to the growth of insecurity. Whereas earlier studies have touched on how globalization has increased economic insecurity and how geopolitical changes may have contributed to military insecurity, this volume looks for some common threads: in a globalized world without a global government, with a system of global governance not up to the task, how do we achieve security without looking inward and stepping back from globalization?

In each of their areas of expertise, contributors seek answers to questions about how we achieve protection of those people who are most insecure without resorting to economic, military, or mafia protectionism. Some have suggested that the turmoil in the Eurozone “proves” the deficiencies in the welfare state. This book argues that the superior performance of Scandinavian countries arises from their superior systems of social protection, which allow their citizens to undertake greater risk and more actively participate in globalization. Some suggest that we can address terrorism or transnational crimes through the strengthening of borders or long-distance wars. This book develops the proposition that such approaches have the opposite effect and that only through spreading the human security experienced in well-ordered societies can these dangers be managed.

This book also examines how these global changes play out, not only in the relations among countries and the management of globalization, but at every level of our society, especially in our cities. It explores the potential for cities to ensure personal security, promote political participation, and protect the environment in the face of increasing urbanization.

Praise for The Quest for Security

“At a time when most initiatives to reinvigorate the multilateral system and its provision of global public goods are failing, it is encouraging to read the analyses and proposals contained in this volume. The key message of this excellent collection of essays is reassuring: that the governance predicaments posed by globalization are solvable after all; the intellectual battle is not lost and it is still possible, with workable propositions, to win the political one in order to build a better international system. With strong conviction, I buy the argument.”  – Ernesto Zedillo, Director of the Yale Center for the Study of Globalization and Former President of Mexico

“This important book offers new thinking for exceptional times. It draws fascinating parallels between what is happening in the fields of economics, security and the environment and demonstrates why and how global solutions are the answer to the current interlinked crises.”  – Javier Solana, Former Secretary General of NATO

“Our interdependent but uncoordinated world, in which we are often at loggerheads with each other, generates many different problems. In an insightful collection of contributions led by Mary Kaldor and Joseph Stiglitz, this wonderful book offers constructive ways of avoiding disaster with the help of global cooperation. A great book for our time.”  – Amartya Sen, Nobel Prize-Winning Economist, and Thomas W. Lamont University Professor and Professor of Economics and Philosophy, Harvard University

“The Quest for Security is one of the most comprehensive assessments of globalization’s challenges published to date. From mounting income inequality to the destructive power of climate change to the threat of terrorist attacks, this timely compilation of expert insight deftly exposes where global governance has failed, and offers pragmatic solutions for building a secure, sustainable and just post-crisis world.”  – George Papandreou, Former Prime Minister of Greece and President of Socialist International

“Every once and a while a book comes along that truly changes the terms of entrenched debates. Protection without Protectionism does just that. Read it and learn how equality and growth can go hand in hand and reinforce each other; how human security offers a paradigm for global security that would transform how diplomacy, development and defense fit together; how a public finance lens can reshape climate policy; and how cities can become engines of global governance. It’s a book for scholars and policymakers alike; one I would like to send to everyone I know in office.”  – Anne-Marie Slaughter, President and CEO of the New America Foundation, and Director of Policy Planning, U.S. Department of State, 2009-11