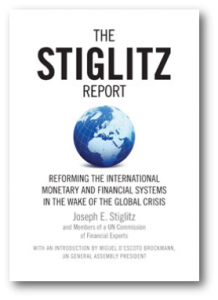 The fact that our global economy is broken may be widely accepted, but what precisely needs to be fixed has become the subject of enormous controversy. In 2008, the president of the United Nations General Assembly convened an international panel, chaired by Nobel Prize–winning economist Joseph Stiglitz and including twenty leading international experts on the international monetary system, to address this crucial issue.

The Stiglitz Report, released by the committee in late 2009, sees the recent financial crisis as the latest and most damaging of several concurrent crises—of food, water, energy, and sustainability—that are tightly interrelated. The analysis and recommendations in the report cover the gamut from short-term mitigation to deep structural changes, from crisis response to lasting reform of the global economic and financial architecture.

The report establishes a bold agenda for policy change, both broad in scope and profound in its ambitions, that is sure to be the gold standard for understanding and contending with the international economy for many years to come.

Available at The New Press.