The Future—And the End?—of AIDS

Throughout much of the world, a diagnosis of HIV/AIDS that once meant a certain death sentence now means living with a chronic, controllable disease. “If you think about the fact that this epidemic was only recognized in 1981, the progress has been enormous,” says David Ho, MD, the AIDS pioneer who was recruited to VP&S this year as the Clyde’56 and Helen Wu Professor of Medicine. “We do not have a vaccine. We do not have a cure. But we have turned a deadly disease into a manageable condition.”

Ho has witnessed that transformation firsthand. He saw some of the earliest AIDS cases in the United States as a resident at Cedars-Sinai Medical Center in Los Angeles in 1980. “I will always remember the young man who came to the hospital with a multitude of infections,” he recalls of his first case. “He was treated but, nevertheless, died within a few weeks after leaving the hospital.”

Soon, another young man with pneumonia and other infections came to the hospital, was treated, and, again, died very quickly. “It was this second, then third case, that began to raise alarm,” says Ho. Within a year, those patients were included in the first case report submitted to the Centers for Disease Control and Prevention on what would become known as the AIDS epidemic.

What he saw in the clinic moved Ho to pursue HIV research throughout the 1980s. His renown grew, and by 1990 Ho had been named scientific director and chief executive officer of the Aaron Diamond AIDS Research Center, or ADARC, the largest independent nonprofit organization dedicated to basic research in HIV/AIDS. In 2019, ADARC moved to Columbia University Irving Medical Center.

Ho’s work has played a key role in what is now known about HIV. He helped elucidate the nature of HIV replication, developed a number of antiretroviral drugs, and at the 1996 International AIDS Conference presented his team’s breakthrough study results that proved combination therapy could reduce HIV viral loads to undetectable levels for at least one year. “That was a turning point in the treatment efforts,” says Ho.

Much of ADARC’s research focuses on antibodies to prevent HIV transmission. One antibody in particular, engineered by ADARC six years ago, obstructs viral entry into the host cell. “It turns out to be extremely powerful in blocking HIV infection in the lab and in laboratory animals,” says Ho. He and his team have initiated a year-long, phase 1 trial of the antibody in infected patients and healthy volunteers. The trial is also being conducted at Columbia, led by Magdalena Sobieszczyk, MD, chief of the infectious diseases division.

If all goes well in this and subsequent human trials, Ho foresees the antibody being delivered every few months by subcutaneous injection to protect against HIV infection, much like a long-acting contraceptive prevents pregnancy. 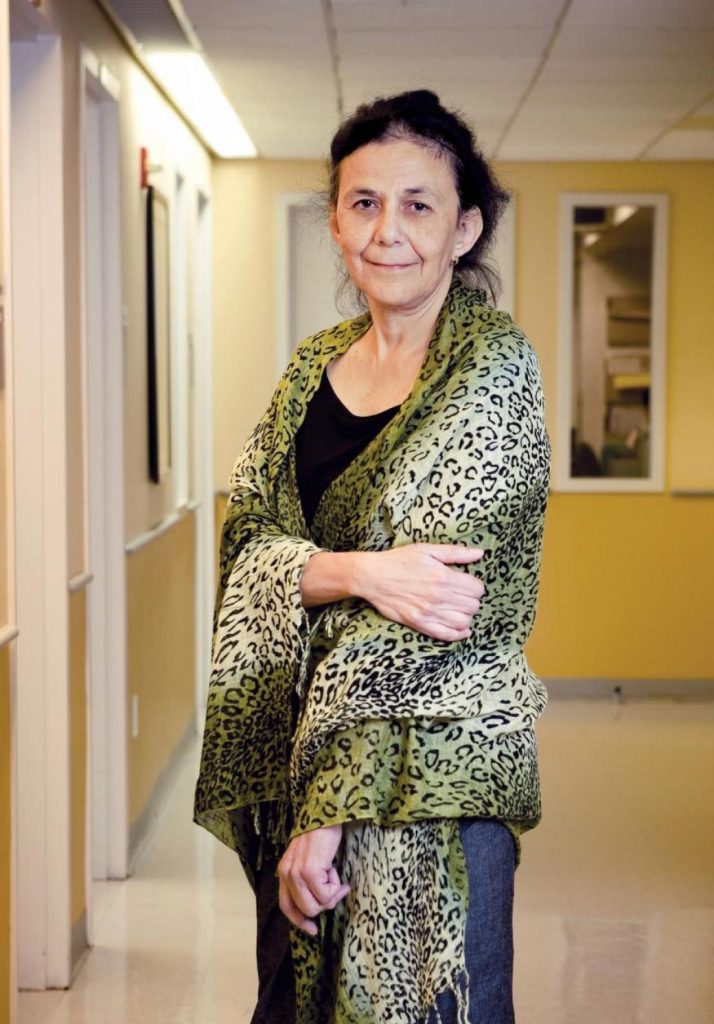 Ho’s antibody research is one vital endeavor amid a broader and urgent effort to prevent new HIV infections worldwide, and ADARC is joining existing Columbia research programs with the same goal. The goal announced by the U.S. president in early 2019—to end AIDS including decreasing the number of new HIV infections by 90% by 2030 in the United States—is a bold one, notes University Professor and global director for ICAP at Columbia University Wafaa El-Sadr, MD. “While there has been a huge scale-up in terms of treatment domestically and globally, we are not on track to reach the goal of HIV prevention in terms of the number of new infections. More than a million are still reported globally every year.”

In May, the New England Journal of Medicine published a perspective on the 2030 target by El-Sadr and coauthored by Miriam Rabkin, MD, associate professor of medicine and of epidemiology (in Columbia’s ICAP) with colleagues at the Fenway Institute and the University of West Virginia. “HIV affects the most vulnerable among us,” they noted, highlighting the disproportionate number of new cases among people of color, transgender people, people in rural areas who use injectable drugs such as opioids, and those most affected by poverty and unstable housing.

The medical community already has the tools to overcome these challenges, says El-Sadr, who is co-principal investigator of the NIH-funded HIV Prevention Trials Network, or HPTN. In 2016, an HPTN study confirmed that HIV treatment is, itself, a highly effective form of prevention. “When you treat people living with HIV,” she says, “not only does the person being treated benefit, but you also decrease the risk of transmission of HIV to others.” Thus, the scale-up of HIV treatment has been a fundamental global priority championed as well by ICAP in the countries where it works.

For individuals who are HIV-negative, several preventive options are now available. An important one is pre-exposure prophylaxis, or PrEP, an approach where persons can protect themselves by taking a daily pill. Post-exposure prophylaxis, on the other hand, offers protection by taking medications after a suspected sexual or occupational exposure to prevent infection.

As co-PI of HPTN, El-Sadr designs and implements HIV prevention research across the United States and in Latin America, Africa, and Asia. “Our goal is to design the best possible research to identify new prevention tools and determine how to use them. Then, importantly, we need to get what we know works to the people who need it so we can demonstrate the benefits at a population level.” The same values infuse ICAP, the Columbia-based global health center that El-Sadr founded in 2003 to develop and deliver comprehensive, family-focused HIV services and evidence-based initiatives to bolster national health systems.

We Still Need to Fight Stigma

Despite more positive attitudes toward people living with HIV, El-Sadr notes that stigma still impedes testing, status disclosures, and access to prevention and treatment among many people in high-risk populations. “Keep in mind that some of these same populations, even without HIV, are stigmatized,” she says. “If you are a young man having sex with men in a Southern rural community in the United States, if you are a transgender woman, even in New York City, your whole outlook on life is shaped by prevailing stigma and discrimination. Adding HIV makes it doubly difficult in so many ways.”

To fight back, El-Sadr marshals creativity and engagement. Many of the ICAP-led projects she has created train and empower peer educators to share their own experiences, talk about how they overcame similar challenges, and encourage others to participate in research studies as well as programs. That approach has been the backbone of her work since the late 1980s, when she established the first HIV research unit at Harlem Hospital. “Peer educators are from the same communities as those we seek to serve. They know what is going to resonate. They also know how to model behaviors. They have been a huge part of our work, whether it be in Tanzania, Swaziland, Kazakhstan, or right here in New York.”

Outreach has been central to the peer educators’ roles, says El Sadr. For example, in Tanzania, the ICAP-supported teams work to reach those most disenfranchised, going wherever they are needed and doing whatever is needed. They organize festive campaigns in village centers, visit artisanal miners, brothels, drug dens, fishing villages where the population is transient. Carrying backpacks loaded with supplies, peer educators talk to people, gain their trust, set up mobile units and tents, or do whatever is needed to get them the prevention and treatment they need. “If you get out of the comfort zone of health facilities, clinics, hospitals, or research labs, get creative and collaborative, and sit with the people, listen to their concerns, speak in their language and offer them prevention, offer them treatment, right where they need it, guess what? They are quite willing to engage.”

With nearly four decades of experience in the field, El-Sadr counsels diligence to achieve the ambitious U.S. HIV goals. First, she says, adequate funding is critically important. Second, the affected communities must be fully engaged. Third, resources and actions must be focused on the populations and locations where they are needed, informed by evidence and data. And finally, hard science must drive policy. “We need to do what is supported by evidence,” she says. “There should be no room for political expediency.”

Ho takes a cautiously optimistic stance on the 2030 target. “It is possible, but a daunting task,” he says. “It requires political leadership, political will, and making sure that resources are properly given to the effort.”

Over the past decade, ADARC has received nearly $50 million collectively from the Gates Foundation and the NIH to advance its research, with more to come. “I think we could move the work we are doing with antibodies into the clinic and into at-risk communities to block HIV transmission even more effectively,” says Ho. “And I believe over the next five or 10 years, we are going to see tremendous progress in preventing HIV infection, not just with drugs like PrEP, but with antibodies and perhaps even with vaccines.”

Decades of innovations, action, and partnerships have ushered in a new era in the global HIV response—one that could mean the end of AIDS. “We are at a moment in history where we know enough to stem this epidemic, and we need to take what we know into action,” says El-Sadr. “At the same time, we must continue to seek new discoveries through research in the laboratory, in the clinic, and in the community. Both discovery and action are needed as we move forward.”