Neil Krishan Aggarwal, MD, is assistant professor of clinical psychiatry in the Vagelos College of Physicians and Surgeons at Columbia University and a research psychiatrist at the New York State Psychiatric Institute.

In giving the award, Professor Jane Gaines, Co-Chair of the Distinguished Book Award Jury and Chair of Columbia University Press’s Faculty Publication Committee, commented that “Mental Health in the War on Terror makes a powerful and elegant argument: that the war on terror has had its influence on mental health knowledge and practice and, in turn, mental health knowledge and practice has impacted the war on terror.”

A ceremony to honor the winner was held on September 26, 2018, at the Casa Italiana at Columbia University. The author of the winning book receives a certificate and a cash award of $10,000. 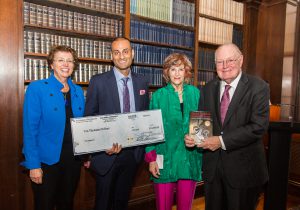 For more information about the award, see http://cup.columbia.edu/award.

Columbia University Press was founded in 1893. Celebrating its 125th year of continuous publishing activities in 2018, it is the fourth-oldest university press in the United States. Notable highlights in its history include the publication of the Columbia Encyclopedia in 1935; the acquisition of The Columbia Granger’s Index to Poetry in 1945; the introduction of the three Sources anthologies of Chinese, Japanese, and Indian classic works in the 1950s; and, over the years, the publication of works by numerous eminent thinkers, including Theodor Adorno, Richard Allen, David Bordwell, Michel Chion, Rey Chow, Thomas Doherty, Todd Gitlin, Mikhail Gorbachev, John Rawls, Philip Rosen, Jeffrey Sachs, Janet Staiger, Joseph Stiglitz, Neil deGrasse Tyson, and Robin Wood. For more information, see http://cup.columbia.edu/.