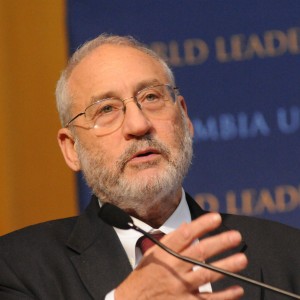 “An economic system that only delivers for the very top is a failed economic system,” Stiglitz said in remarks prepared for speech in Washington today.

“In the past, when our country reached these extremes of inequality, at the end of the 19th century, in the gilded age or in the Roaring ’20s, it pulled back from the brink,” Stiglitz said. “It enacted policies and programs that provided hope that the American dream could return to being a reality.”

He said the nation is “now at one of these pivotal points in history” when something needs to be done.

Stiglitz, a professor at Columbia University in New York and economic adviser to former President Bill Clinton, is speaking at George Washington University, where he was accepting the Moynihan Prize for social science research.

He offered a package of policy prescriptions to narrow income and wealth inequality, including higher taxes on the rich, increasing the minimum wage, more spending on education, and stronger antitrust laws.

“We need macroeconomic policies that maintain economic stability and full employment,” he said. “Workers are suffering thrice over: from high unemployment, weak wages and cutbacks in public services.”