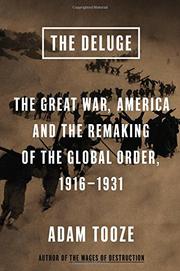 A vigorously defended argument that the war to end all wars was really the origin of a new world order and American superpower.

Taking a truly global view of World War I, Tooze (History/Yale Univ.; The Wages of Destruction: The Making and Breaking of the Nazi Economy, 2007, etc.) holds that the conflict was Europe’s undoing in more ways than one. Obviously, it laid the groundwork for the global war to follow, but it also announced the arrival of an America that was able to act unilaterally on the world stage. The huge bloodletting also left the losing, and even some of the victorious, powers politically unstable. The author highlights Hitler, of course, but also Leon Trotsky as representatives of a sweeping change by which the war “opened a new phase of ‘world organization.’” What is novel about Tooze’s thesis is that, in this light, Hitler, Mussolini and the military leaders of Imperial Japan saw themselves as rebels against this new world order, which oppressed Germany financially and dismissed Italian and Japanese claims for rewards for their parts in defeating the Central Powers; all resented the notion that the terms of the transition to this new world order were dictated by the upstart United States. Interesting, too, is the author’s interpretation of America’s artful use of soft power, favoring political and economic influence over direct military intervention whenever possible. One negative consequence was Wilson’s negotiation of a “peace without victory” at the end of the war that promoted a subsequent instability made lethal with the worldwide economic collapse a decade later. In discussing what he calls “the fiasco of Wilsonism,” Tooze sometimes drifts into highly technical economic matters such as the mechanics of hyperinflation, but his narrative is gripping—and sobering, since readers well know the tragedies that followed.

A lucid, first-rate history of the results of a war whose beginning a century ago we are busily commemorating.