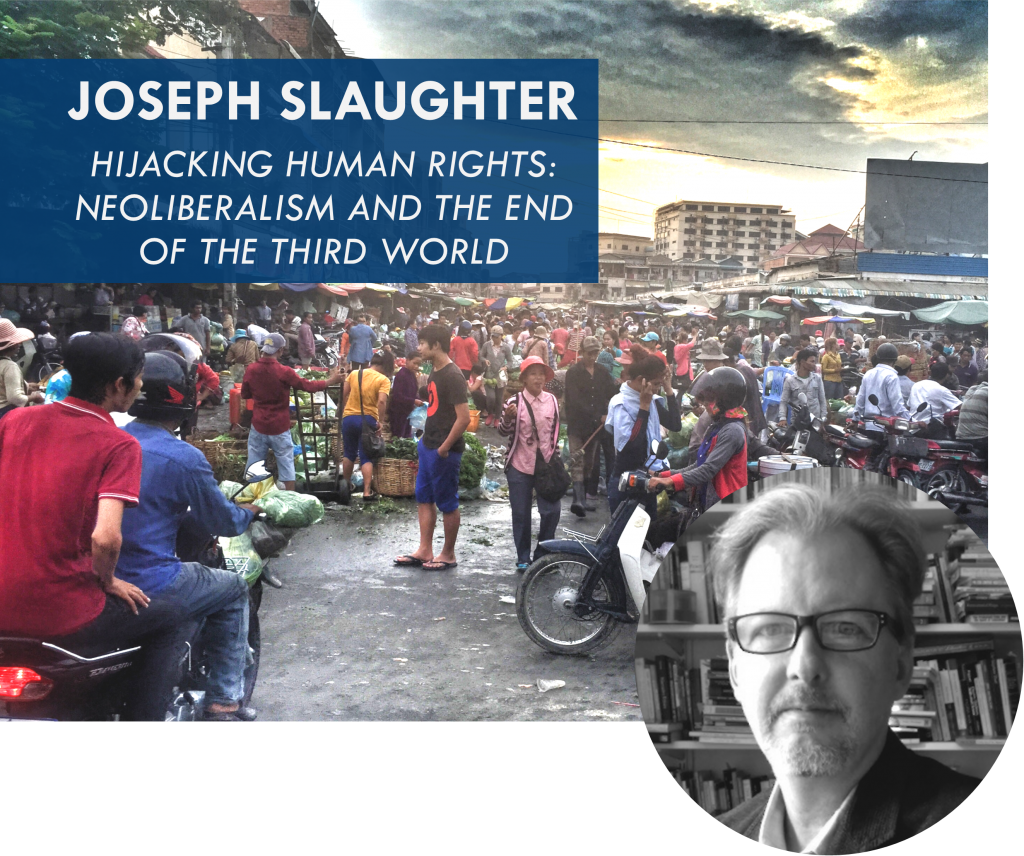 Hijacking Human Rights: Neoliberalism and the End of the Third World

The Committee on Global Thought (CGT) Lunchtime Seminars are a forum for Columbia University faculty and visiting scholars to discuss current research characterizing and assessing issues of global importance. Open to Columbia affiliates only. No registration is required. Light lunch will be available.

Over the past decade, a new historiography of human rights has identified the 1970s as the crucial period when human rights discourse gained traction globally. Most of the historians working in this mode adopt a North Atlantic perspective on the history and concept of human rights; they relegate stories and struggles outside the U.S. and Europe to minor, inconsequential, or irrelevant uses of the languages of human rights. The story of the West’s reduction of human rights to a limited set of individual civil and political protections against state abuses in the 70s cannot be told without recognizing the dramatic foreclosure of other more radical visions of human rights that still obtained in the Third and Fourth Worlds: national self-determination, economic redistribution, and social and cultural security. If the 1970s was the decade of human rights, it was also the decade of hijackings, many of which were undertaken in the name of those broader struggles. As Joseph Slaughter argues, however, none of those airline hijackings were quite as effective as the neo-liberal hijacking of human rights.

Joseph R. Slaughter is an Associate Professor of English and Comparative Literature at Columbia University. He specializes in literature, law, and socio-cultural history of the Global South (particularly Latin America and Africa). He’s especially interested in the social work of literature—the myriad ways in which literature intersects (formally, historically, ideologically, materially) with problems of social justice, human rights, intellectual property, and international law.

His honors include a Guggenheim Fellowship, Public Voices Fellowship, Lenfest Distinguished Faculty Award. His book Human Rights, Inc.: The World Novel, Narrative Form, and International Law (Fordham UP, 2007), which explores the cooperative narrative logics of international human rights law and the Bildungsroman, was awarded the 2008 René Wellek prize for comparative literature and cultural theory. His essay, “Enabling Fictions and Novel Subjects: The Bildungsroman and International Human Rights Law,” was honored as one of the two best articles published in PMLA in 2006-7. He was elected to serve as President of the American Comparative Literature Association in 2016.

His essays and articles include : “World Literature as Property” in Alif: Journal of Comparative Poetics; “However Incompletely, Human” in The Meanings of Human Rights: Philosophy, Critical Theory, Law; “‘It’s good to be primitive’: African Allusion and the Modernist Fetish of Authenticity” in Modernism and Copyright; “The Enchantment of Human Rights; or, What Difference Does Humanitarian Indifference Make?” in Critical Quarterly; “Vanishing Points: When Narrative Is Not Simply There” in The Journal of Human Rights; “‘A Mouth with Which to Tell the Story’: Silence, Violence, and Speech in the Narrative of Things Fall Apart” in Emerging Perspectives on Chinua Achebe; “Master Plans: Designing (National) Allegories of Urban Space and Metropolitan Subjects for Postcolonial Kenya” in Research in African Literatures; “Introducing Human Rights and Literary Form; Or, the Vehicles and Vocabularies of Human Rights,” co-authored with Sophia A. McClennen, in Comparative Literature Studies; “A Question of Narration: The Voice in International Human Rights Law” in Human Rights Quarterly; “Humanitarian Reading” in Humanitarianism and Suffering: The Mobilization of Empathy through Narrative. Slaughter is a founding co-editor of Humanity: An International Journal of Human Rights, Humanitarianism, and Development.

He is co-editing a volume of essays, The Global South Atlantic, that explores some of the many social, cultural, political, and material interactions across the oceanic space between Africa and Latin America that have made it historically (im)possible to imagine the South Atlantic as a coherent region. He is currently working on two monographs, “Pathetic Fallacies: Essays on Human Rights, Humanitarianism, and the Humanities” and “New Word Orders: Intellectual Property and World Literature,” which considers the role of plagiarism, piracy, and intellectual property regimes in the globalization of the novel, as well the work the novel might do to interrupt globalization and to resist monopoly privatization of cultural and intellectual creations. 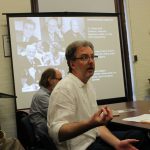 Professor Joseph R. Slaughter engages in discussion with the audience. 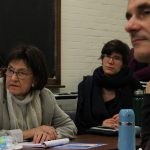 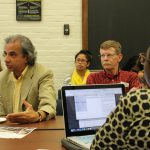 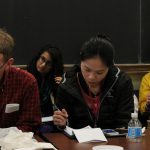 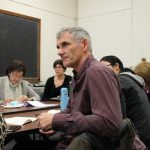 CGT member Professor Larkin in attendance at the seminar. 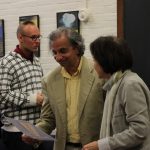 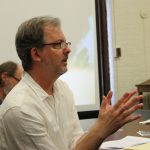 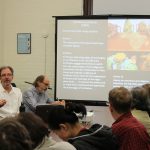 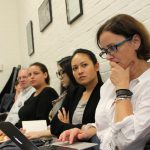 Martha Poon among the audience at the seminar.

Click here to view all photos from this Lunchtime Seminar.

Below is the schedule for Fall 2016. The seminar takes place on Thursdays from 12-1pm in Fayerweather Hall, Room 411 unless otherwise noted. Please check back for updates to the schedule.

Kian Tajbakhsh on "The Limits of Global Thought: Western Social and Human Sciences on Trial"

Brian Larkin on "Generators, Electricity and the Infrastructural Life of Cities"

Saeed Naqvi on "Being the Other: The Muslim in India"

Rosalind Morris on "Movement without Mobility, Settlement without Belonging: A Proposal for Theorizing 'Unsettlement' Today"

Henry Rousso on "The Latest Catastrophe: History, the Present, the Contemporary"

Vegard Skirbekk on "Differences in Aging Across Cultures: A Global Perspective"

The seminar takes place on Thursdays from 12-1pm in Fayerweather Hall, Room 411 unless otherwise noted. Please check back for updates to the schedule.