Genesis of the Project 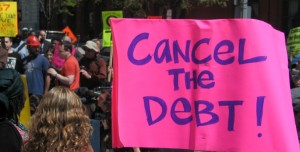 Debt is the hallmark of contemporary financial capitalism. It pervades every aspect of political, economic and social life by helping fund governments and firms, fueling housing and consumer markets, and driving up stock prices and GDP growth rates around the globe. Debt does not produce only winners; given the inherent instability of debt finance, it inevitably leaves a trail of failures in the form of insolvent states, bankrupt firms, households and individuals who drown in their debt. While debt precedes the advent of modern financial capitalism, the nature of debt and debt relations has been transformed by it. Creditors used to be directly tied in a relation of mutual dependence to their debtors and to the risk that they might default. The marketization of debt means that debt assets are now spread among a multitude of investors in various locations, each holding a portfolio of often short-term claims against various debtors they know only by the amount, duration, and rating of the claims against them.

The spreading of risk encourages creditors to lend more and allows debtors to borrow more, even in the absence of expected robust growth to ensure that bets on the future will actually pay off. Refinancing, or “ponzi-finance” (Minsky) dominates financial practice.

In a fully integrated global financial system, however, there is no place to hide. So far, a handful of central banks have kept the system afloat by offering almost unlimited liquidity support and on occasion creditor bailouts, or (though less frequently) debt moratoria. A pressing question is, whether such a system can be sustained in the long term. Equally important are the unintended yet tolerated side effects this system creates: growing inequality and increased uncertainty for debtors who find themselves on the periphery of a system that tends to protect entities at its core.

Similar patterns can be observed domestically and globally; for sovereign, state, and municipal debt, as well as for households, for financial intermediaries and for non-financial firms.

A World Indebted, a new project of Columbia’s Committee on Global Thought will take a close look at debt dependencies and inter-dependencies and how they shape economic inequality and political tensions within and between countries.

Policy Brief 25: Are Standard Macro Policies Enough to Deal with the Economic Fallout from a Global Pandemic? Thomas Drechsel and Şebnem Kalemli-Özcan, March 2020.